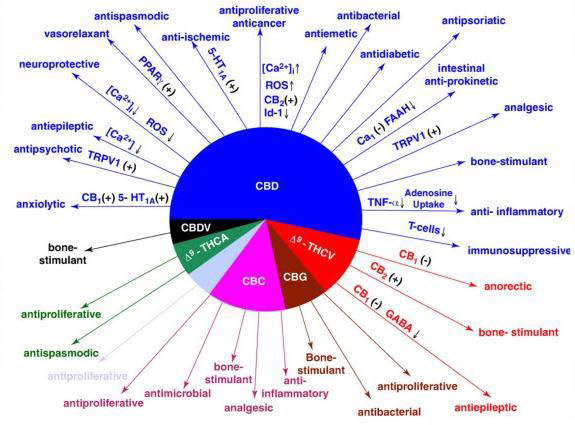 Cannabidiol (CBD), a non-psychoactive component of the marijuana plant, has generated significant interest among scientists and physicians in recent years—but how CBD exerts its therapeutic impact on a molecular level is still being sorted out. Cannabidiol is a pleiotropic drug in that it produces many effects through multiple molecular pathways. CBD acts through various receptor-independent channels and by binding with a number of non-cannabinoid receptors and ion channels.

CBD and FAAH
Unlike psychoactive THC, CBD has little binding affinity to either the CB1 or CB2 cannabinoid receptors. Instead, CBD indirectly stimulates endogenous cannabinoid signalling by suppressing the enzyme fatty acid amide hydroxylase (FAAH)—the enzyme that breaks down anandamide, the first endocannabinoid discovered in the mammalian brain in 1992.

Whereas the cannabinoid molecules found in cannabis are considered “exogenous ligands” to the cannabinoid (CB) receptor family, anandamide is an “endogenous” cannabinoid ligand—meaning it binds to one or more cannabinoid receptors and is found naturally inside the mammalian brain and body. Anandamide favors the CB1 receptor, which is concentrated in the brain and central nervous system. Because FAAH is involved in the metabolic breakdown of anandamide, less FAAH means more anandamide remains present in the body for a longer duration. More anandamide means greater CB1 activation.

By inhibiting the enzyme that metabolises and degrades anandamide, CBD enhances the body’s innate protective endocannabinoid response. At the same time, CBD opposes the action of THC at the CB1 receptor, thereby muting the psychoactive effects of THC.

CBD also stimulates the release of 2-AG, another endocannabinoid that activates both CB1 and CB2 receptor. CB2 receptors are predominant in the peripheral nervous system and the immune system.

The Vanilliod Receptor
While CBD has little binding affinity for either of the two cannabinoid receptors, it has been shown to directly interact with other “G-protein-coupled” receptors and ion channels to confer a therapeutic effect. CBD, for example, binds to the TRPV-1 receptor, which is known to mediate pain perception, inflammation and body temperature.

TRPV is the technical abbreviation for “transient receptor potential cation channel subfamily V.” There are several dozen TRP receptor variants or subfamilies that mediate the effects of a wide range of medicinal herbs.

Scientists also refer to TRPV-1 as the “vanilloid receptor,” named after the flavourful vanilla bean. Vanilla contains eugenol, an essential oil that has antiseptic and analgesic properties; it also helps to unclog blood vessels. Historically, the vanilla bean has been used as a folk cure for headaches.

CBD is a TRPV-1 “agonist” or stimulant. This is likely one of the reasons why CBD-rich cannabis is an effective treatment for neuropathic pain.

The Serotonin Receptor
Jose Alexandre Crippa and his colleagues at the University of San Paulo in Brazil and at the King’s College in London have conducted pioneering research into CBD and the neural correlates of anxiety.

At high concentrations, CBD directly activates the 5-HT1A (hydroxytryptamine) serotonin receptor, thereby conferring an anti-depressant effect. This receptor is implicated in a range of biological and neurological processes, including (but not limited to) anxiety, addiction, appetite, sleep, pain perception, nausea and vomiting.

5-HT1A is a member of the family of 5-HT receptors, which are activated by the neurotransmitter serotonin. Found in both the central and peripheral nervous systems, 5-HT receptors trigger various intracellular cascades of chemical messages to produce either an excitatory or inhibitory response, depending on the chemical context of the message.