A mother has revealed how she was made to feel like a criminal for giving her brain-damaged child cannabis oil in a bid to curb her life-threatening epilepsy.

Louise Bostock was even threatened with police action and told her children might be taken away from her after she gave the herbal remedy to three-year-old Jayla.

The 30-year-old, from Edrington, Birmingham, said she started using the oil to try and stop her daughter’s violent epileptic fits, which can last for up to ten days. 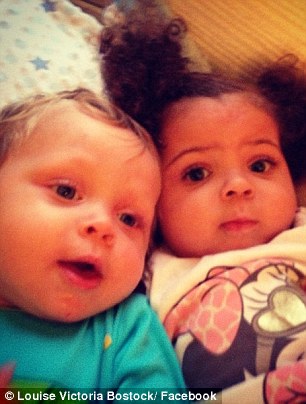 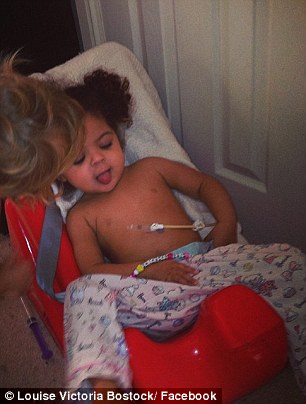 and right) has a degenerative brain condition and is not expected to live beyond her childhood years. She cannot walk or talk and must be fed through a tube

Ms Bostock – who is engaged to the brother of Aston Villa striker Gabby Agbonlahor – claimed she saw a huge change in her daughter and even saw her smile for the first time.

But when she told nurses at Birmingham Children’s Hospital about the oil, Ms Bostock was told she was not allowed to bring her child home. Jayla was held in hospital for another five days, despite there being no medical reason to keep her there.

She said: ‘It’s been an absolute nightmare. Completely heartbreaking in every way. I was made to feel like a criminal just for trying to do the best by my daughter.’

After the incident was flagged up by medics, police attended a safeguarding meeting which was called by council officials. Ms Bostock was also told that her son Junior would have to stay with relatives while tests were carried out on the product.

The mother-of-two, whose daughter was finally released from hospital yesterday, has now been told she faces no further. But she said the incident had been ‘heartbreaking’.

She said: ‘Since having the oil, Jayla’s quality of life has completely changed.

‘Usually, she is comatose and sleeps all day. But she has actually started to eat properly and now watches TV with a smile on her face. I heard her laugh out loud for the first time – can you imagine?

‘But I was told that she had to stay in hospital and that police would be called if I didn’t comply. I didn’t understand it. There was even talk of my kids being taken away from me because I was trying to help Jayla. I was essentially being punished for trying to save my daughter’s life.’

Shortly after her first birthday, Jayla suddenly stopped breathing. She was in hospital for the next five months. Doctors initially thought she had epilepsy but have now put it down to an undiagnosd degenerative brain syndrome.

Now, Jayla cannot walk or talk and is fed through a tube. She also has violent seizures every three or four weeks, which usually last between five and ten days.

The seizures are so extreme that they lead to bleeding in her stomach. During the episodes, she also needs oxygen and suctioning to stop her choking and to be propped up in her bed at all times.

Although her condition remains a mystery to medics, they have predicted that she is unlikely to live beyond her childhood years. 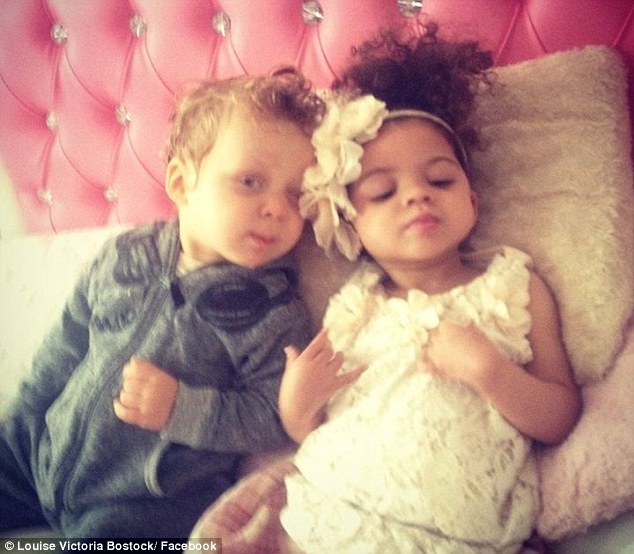 When Ms Bostock told nurses at Birmingham Children’s Hospital about the oil, she was told she was not allowed to bring her child home – and Jayla was held in hospital for another five days

Ms Bostock found out about the oil when she started doing research into Jayla’s condition. She found numerous U.S studies which state that compounds within the oil can reduce seizures in children by up to 50 per cent.

The oil is legal and can be bought online or in shops but is only prescribed to adults with Multiple Sclerosis (MS).

Ms Bostock claims that, since she has been giving her the oil, Jayla has only had one seizure which lasted just two days – significantly shorter than any other she has had.

She said: ‘What’s crazy is that you can buy the oil easily. And there are so

many cases where people’s lives have been saved – or at least made better – through that oil. Why should my daughter not get to give that a go?

‘It’s just a plant, a natural remedy. The government are even doing trials on it. But they still won’t give it her. My daughter has essentially been sent home to die. They say there’s nothing more they can do.’

Ms Bostock found out about the oil by researching online. She was inspired by the case of Charlotte Figi, an eight-year-old girl in the U.S who now has just two seizures per months after taking the oil, despite previously having up to 300 seizures per week.

The oil contains a compound called Cannabidiol (CBD) which has anti-spasmatic properties and does not affect the mind or behaviour.

It has low quantities of tetrahydrocannabinol (THC), which is the mind-altering component of cannabis.

She said: ‘There are so many cases of cancer patients taking it, worldwide, and being healed. It’s saving people’s lives but these patients are still staying hush hush because it’s such a taboo.’

Police have since told Ms Bostock that she faces no further action. She has also been assured that she will not be prosecuted if she continues to use the oil.

Following the safeguarding meeting, she was also told that her children will not be taken away.

She is now waiting for a meeting with her daughter’s neurologist to see if she can get the oil prescribed.

A spokesman for Birmingham City Council said: ‘When concerns are raised by health professionals, Birmingham Children’s Services has a responsibility to investigate.’

Previous Post: Pot for Parkinson’s? The Scientific Evidence Is Compelling
Next Post: Medical Benefits of Cannabis: Treatment for Epilepsy and More