How Does Cannabis Kill Cancer Cells ? by Jeffrey Dach MD

An Exciting Time for Medicinal Cannabis

It is an exciting time for medicinal cannabis, now legal in twenty three states as of June 2014, and widely used by ordinary people as a home cancer treatment.  There has been considerable success, and one can read the inspiring stories of remission from cancer on internet Blogs and Message Boards.

Our previous articles in this series have discussed the use of medicinal cannabis oil as curative for leukemia and malignant brain tumors.  In this article, we will delve into the exact cellular mechanism by which cannabis kills cancer cells while sparing normal cells.

Strictly speaking, we must confess that medicinal cannabis does not actually “kill” anything, rather, it serves as a messenger that triggers cell signalling pathways leading to programmed cell death via autophagy and apoptosis.  In other words, the cancer cell kills itself in a form of suicide,  Programmed cell death (PCD) is a normal part of the cell cycle,  and a mechanism for destroying unwanted or damaged cells such as cancer cells in the body.  Molecular programs intrinsic to the cell are activatedto cause its own destruction.

Programmed Cell Death (PCD) – What Is It ?

Another name for Programmed Cell Death  (PCD) is “Apoptosis”, a Greek word for “falling away”, coined by Dr J.F. Kerr in his groundbreaking 1972 article on apoptosis.(10)  As a normal part of our life cycle, 10 million of our own cells are lost daily via apoptosis,  and require replacement cells to take their place. (11)  In disease states, there may be disruption in the cellular machinery or signaling pathways that control apoptosis.  Excessive apoptosis may cause neurodegenerative disease. Not enough apoptosis may cause cancer.(11)

The 2002 Nobel Prize in Physiology or Medicine was awarded to Sydney Brenner, H. Robert Horvitz, John E. Sulston for their work on Programmed cell Death, also called “Apoptosis”.  This gives you an idea of how important Programmed Cell Death is to biology, health and medicine.

Apoptosis is characterized by cell shrinkage and preservation of the cell membrane which keeps cell contents nice and neat. This must be distinguished from cell necrosis, a more brutal form of cell death caused by toxic injury, such as chemotherapy treatment.  Necrotic cells typically show cytoplasmic swelling and rupture of the cell membrane, with release of cellular debris into the surrounding tissues which evokes an inflammatory response. A quote from Molecular Biology of the Cell explains the difference(13)

Cells that die as a result of acute injury typically swell and burst. They spill their contents all over their neighbors—a process called cell necrosis—causing a potentially damaging inflammatory response. By contrast, a cell that undergoes apoptosis dies neatly, without damaging its neighbors. The cell shrinks and condenses. The cytoskeleton collapses, the nuclear envelope disassembles, and the nuclear DNA breaks up into fragments. Most importantly, the cell surface is altered, displaying properties that cause the dying cell to be rapidly phagocytosed, either by a neighboring cell or by a macrophage, before any leakage of its contents occurs. This not only avoids the damaging consequences of cell necrosis but also allows the organic components of the dead cell to be recycled by the cell that ingests it.(13)

Apoptosis What is It?:

Far left image (A) is a cell that has died from necrosis such as seen from cytotoxic effect of chemotherapy or chemical poison.  Notice the cell has “exploded”  with debris and cell contents released into surrounding tissues and circulation.  Right Images B and C show cells dying from apoptosis, a more controlled process in which there is no release of debris or cell cell contents into surroundings.  Dying cells are scavenged by Macrophages. Apoptotic cells in panels (B) and (C) remain relatively intact while undergoing controlled cell death.

The Biology of Cancer

Having the Right Tools

The 2003 Human Genome Project sequenced the entire human genome, a scientific milestone, on par with the first unmanned satellite to orbit the Earth, or the splitting of the atom in the first particle accelerator.    Along the way, new research tools of molecular biology were developed.  These new molecular biology tools allow us to peer into the inner working of cell biology and glimpse the secrets of the cancer cell.

If you ask your local doctor the question, “what causes cancer?”, he may tell you “we just don’t know”.  This is not entirely correct. We do know. Even the American Cancer society admits that carcinogenic chemicals in the environment cause cancer.  If you walk through the hallowed halls of your local university medical school,  and ask a cancer researcher,  “how do you give your mice cancer?  A typical reply: They give the mice carcinogenic chemicals to give the animal cancer.  These chemicals cause oxidative damage to the DNA.  Of course, our cells are prepared for this and will quickly repair the oxidative damage.  However, our repair mechanisms can be overwhelmed, leading to transformation of the normal cell to a cancer cell.

Normal cells have a well defined life cycle, starting out as a primitive stem cell, they differentiate into their predestined specialized cell type (liver cell, muscle cell, nerve cell, light receptor cell, red blood cell, etc.)  Once differentiated, these mature cells have a limited life span, replicating about fifty times, called the Hayflick Limit.  During the life span of a cell, there is an aging process in which cell damage accumulates and causes loss of function.  This aging process is caused by oxidative damage to cell organelles, a normal side effect of mitochondrial energy production.  Once the cell becomes dysfunctional, internal mechanisms signal it is time for programmed cell death by apoptosis and autophagy, two cell mechanisms we will discuss in more detail below.  This end of life event for the cell is called  “cell senescence”.

The Hayflick Limit Does Not apply to Cancer Cells

In cell culture, normal cells replicate by means of mitosis about 50 or 60 times, and then are instructed to undergo PCD (programmed cell death).  This is called the Hayflick Limit.  For cancer cells, the Hayflick Limit does not apply, as cancer cells are immortal and will replicate indefinitely.  Cancer cells have escaped the final instruction of programmed cell death.  The cancer cell laughs at “cell senescence”, proliferates uncontrollably and is seemingly immune to normal control.  This is where the endocannabinoid system and phyto-cannabinoids come in to the picture. Medicinal Cannabis restores the cancer cell’s ability to undergo programmed cell death, which is then automatically triggered, while leaving normal cells unharmed.

Polyploidy and Aneuploidy in Cancer Cells

Normal human cells have 46 chromosomes, while cancer cells have more.  This peculiar increased number of chromosomes in cancer cells is called “polyploidy“, and aneuploidy.  The number of chromosomes are increased caused by a defect or flaw in the machinery of cell division.  The increased nuclear material (chromatin) may be visible on histologic examination with light or electron microscopy.  Cancer cells are “genetically unstable” with  many other genetic alterations, (chromosomal translocations inversions, gene deletions, gene amplifications, point mutations, duplications and loss of whole chromosomes.)  The cancer cell also has alterations in cell size, shape and morphology identified when compared to normal cells in the surrounding tissues.

Other features of cancer cells.

Cancer cells may produce their own growth factors as well as receptors for these growth factors, creating a powerful feedback loop for uncontrolled cell growth and replication.  Cancer cells may produce proteolytic enzymes (such as matrix metalloproteases, MMPs) which dissolve the extracellular tissue matrix and allow  cancer cells to invade surrounding tissues, blood vessels and lymphatic which are the gateways to metastatic spread.  This is described in my previous article on the Trophoblastic theory of Cancer.

Although the exact mechanism of medicinal cannabis in cancer has remained elusive, recent studies  in the laboratories of Drs.  Sean McAllister, Shrivastava and Guzman, are closing in on how  THC and CBD trigger programmed cell death in the cancer cell. 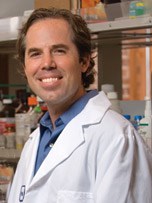 Sean McAllister and his colleagues at the California Pacific Medical Center in San Francisco report CBD is a novel inhibitor of the ID-1, gene, a key regulator of cellular growth and cell cycle machinery involved in cell differentiation, maturation, senescence and finally programmed cell death.(1-3,19)  Dr Sean McAllister’s group also report the combined use of THC with CBD has a synergistic effect with more profound suppression of cancer activity than the use of CBD alone.(4)  Above left image courtesy ofSean McAllister.

The discovery of the ERK/MAPK signaling cascade was a major breakthrough in our understanding of cancer biology and has stimulated intensive efforts by the research community and pharmaceutical industry to develop inhibitors of ERK/MAPK signalling for cancer treatment.(link) (31) 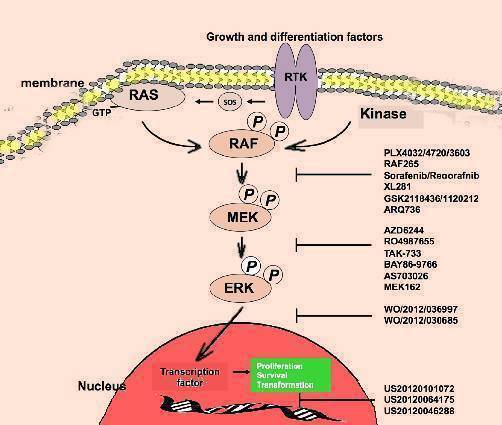 Figure courtesy of Wong from AntiCancer_Drugs_Against_Ras_Raf_MEK_ERK_Pathway_2013

The ERK pathway receives signals with receptors located on the outer cell membrane (Yellow).  These signals are then transferred to the cell nucleus (Red) ato regulate gene expression.  The ERK signalling cascade is involved with cell replication, growth, differentiation, and cell survival.  Dysregulation of the ERK pathway leads to dysregulation of ID-1 and this is a common occurrence in human cancers.  Sean McAllister’s group reports that CBD up-regulates ERK signalling which inhibits cancer cell proliferation and invasion via down-regulation of ID-1 genetic expression.(1-3)

“The expression of Id-1 protein  has been reported to be dysregulated in over 20 types of cancer, and suggested as a key determinant of tumorigenesis and/or metastasis in a wide range of tissues, including the breast [34, 35]. Reducing Id-1 expression (a gene whose expression is absent in most of the healthy adult tissues) could therefore provide a rational therapeutic strategy for the treatment of aggressive cancers.”(2) 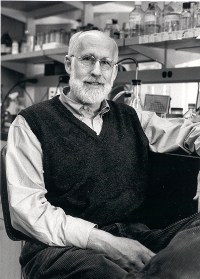 They found that CBD induced cell death was concentration dependent, and applied equally to (ER+) estrogen receptor-positive and as well as (ER-) breast cancer cell lines.  Furthermore, the CBD (cannabidiol) preferentially killed cancer cells, while having no deleterious effect on normal breast cells (MCF-10A cells).  The mechanism of action of CBD was independent of cannabinoid receptors CB1, CB2 and Vanniloid receptors.  They suggested that the receptor mediating CBD in programmed cell death is yet to be discovered.  Their further studies showed that PCD was associated with mitochondrial-mediated apoptosis through both intrinsic and extrinsic cell signalling pathways.  Their model also demonstrated that within 2 hours of incubation of the breast cancer cells with CBD, there were signs of ER (endoplasmic reticulum) stress which leads to cell autophagy, in this case, a preclude to programmed cell death.

Autophagy, What is It ?

Shrivastava’s group found that CBD treated breast cancer cells showed evidence of autophagy, a term meaning “the cell literally eats itself”.  “Phage” is derived from the Greek word “phagos”, “to eat”.  The characteristic morphologic feature of autophagy shown by examining these cells with the light or electron microscope is the “autophagosome”, a unique double membrane structure in which cell organelles are sequestered and digested, or “eaten”. See schematic image at upper left showing autophagosome double membrane.(6)

Above image shows autophagosome, double membrane vesicle which then fuses with lysosome (which contains oxidative granules) to form the auto-lysosome.  Within the auto-lysosome, the organelles undergo fragmentation and degradation.(7)

CBD induces both apoptosis and autophagy 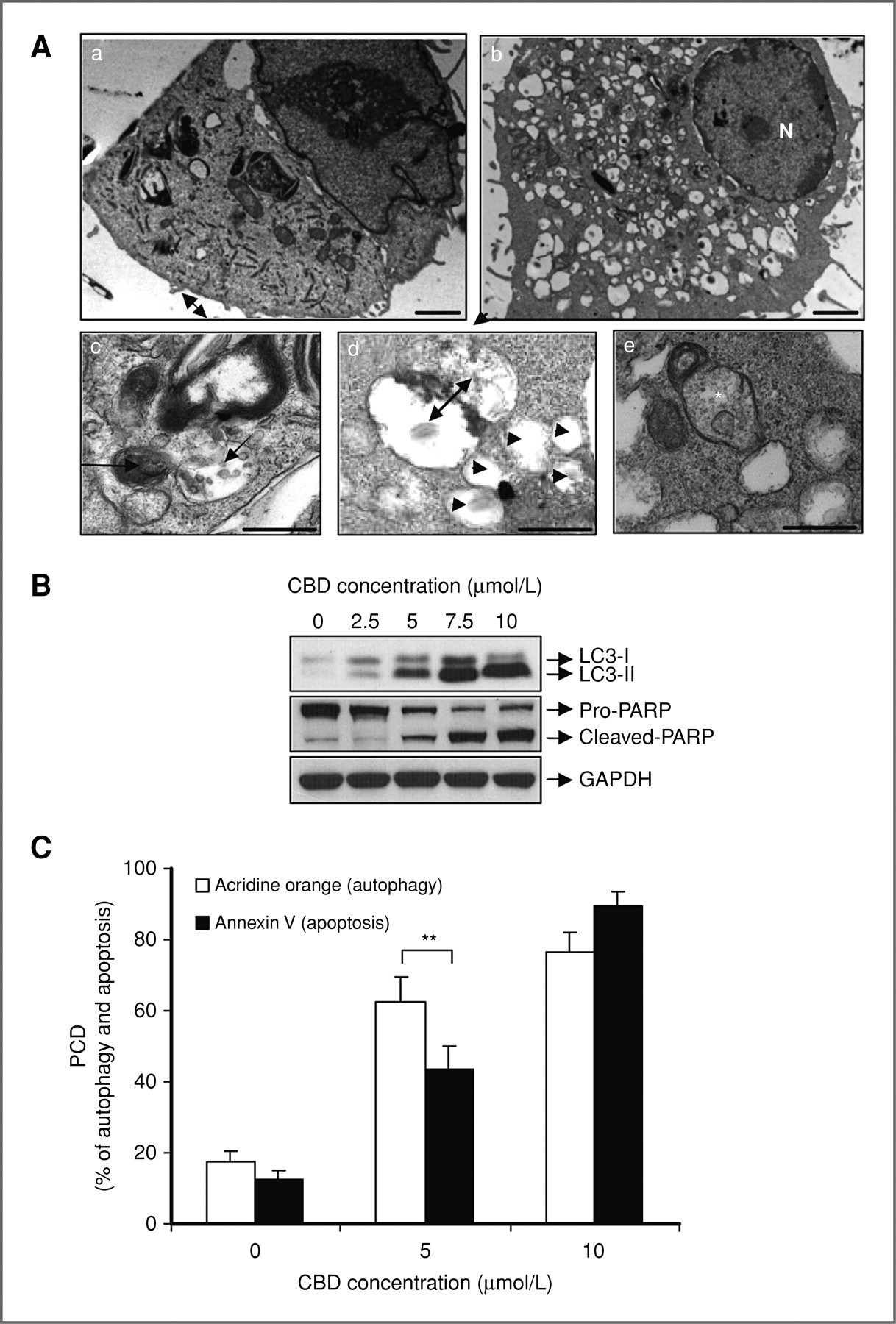 The machinery of Apoptosis Involves the Mitochondria 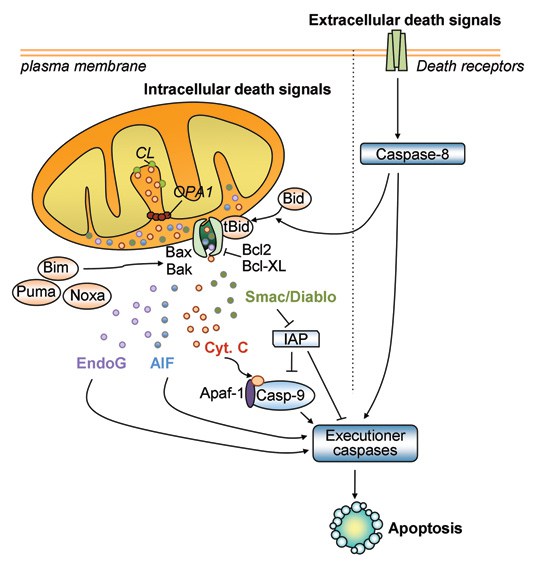 Above Diagram shows  the intrinsic mitochondrial pathway which involves activation of  caspase enzymes cascades, the final step in programmed cell death.  Upon trigger event such as CBD activation of the VDAC (voltage dependent anion channedl) (17) , the Mitochondrial outer membrane becomes permeable.  This is a point-of-no-return in the mitochondrial apoptotic pathway and induces Mitochondrial release of  cytochrome C to the cytosol which then initiates cell death in a caspase-dependent manner.  In addition to proteolytic degradation of cell organelles, proteolytic enzymes are released to the nucleus which  induce DNA fragmentation.

This article is part one.  For part two click here.